Valentina Ceschi studied at the Ecole Internationale de Théâtre Jacques Lecoq and at the L.E.M.*, in Paris between 2006 and 2008. She has been working as a performance maker and theatre practitioner for over ten years. She is co-artistic director with Thomas Eccleshare of the award-winning contemporary theatre company Dancing Brick, a resident Ensemble Company at the Royal & Derngate in Northampton and associate artist at Farnham Maltings; and co-founder of experimental costume-led performance collective Ceschi + Lane. Her work has been showcased at Prague Quadrennial, Scenofest at the World Stage Design Fest Taipei and Napoli Teatro Festival as well as other national and international festivals. As an actor she has worked with Tobacco Factory Theatres, Cambridge Junction, Sheffield Theatres, Talawa, Soho Theatre and the Unicorn in London. She works as a director, movement director and dramaturg with many theatre artists, opera companies and cabaret performers and is associate lecturer at the University of the Arts London. 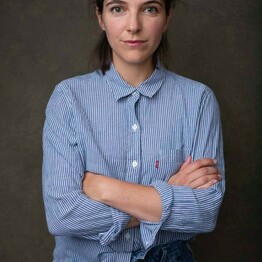