Brenton Spiteri is an Austalian-Maltese tenor who has recently appeared as Conte Alberto (L’occasione fa il ladro) for British Youth Opera, Narciso (Il turco in Italia) for Longhope Opera and Beppe (Rita) for Guildhall Opera. Previously, he has performed the roles of Trac (Le Roi Carotte), and Soldato/Mercurio (The Coronation of Poppea) for Opéra de Lyon, and was Tenor Soloist in Schnittke’s Faust Cantata at the Barbican.

Prior to his postgraduate studies on the Guildhall Opera Course, his performed roles included Tamino (The Magic Flute), Count Almaviva (The Barber of Seville), Rinuccio (Gianni Schicchi), Telemaco (The Return of Ulysees) and Ernesto (Don Pasquale). He also won first prize in the Herald Sun Aria and was runner-up in the Mietta Song Competition.

For the Sydney Symphony Orchestra, he has performed Britten’s Les Illuminations; and for Sydney Chamber Opera, he created the roles of Oscar Hopkins in Oscar and Lucinda and Ashley in Fly Away Peter. 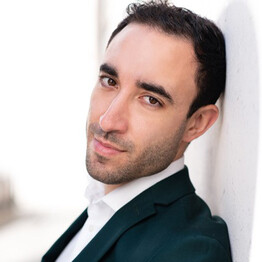