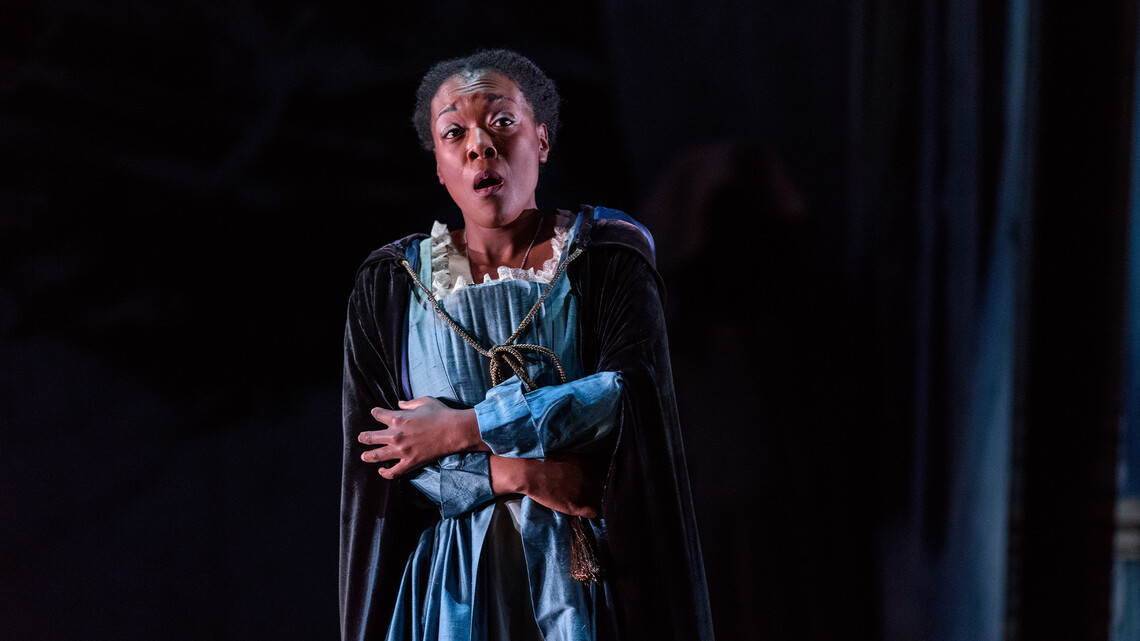 To celebrate International Women's Day this year, we will be shining a light on the female artists, creatives and technicians who make our work happen. First up is soprano, director and ETO board member Abigail Kelly!

ETO: Can you tell us about your work with ETO so far? What have been your different roles with the organisation?

Abigail Kelly: I’ve had a really interesting journey with English Touring Opera. My first role was in Bridgetower: afable of 1807 by Julian Joseph, a community jazz opera. A few months later I was touring the country again, only this time going into schools performing in an opera for children based on the Trojan war called In the Belly of the Horse. That’s when I realised that there were so many facets to opera and so many ways to connect with a variety of audiences which is the main thing I love about the art form.

Over the years I’ve then performed in operas for young people and children with special educational needs and/or disabilities (SEND) as well as collaborated with other artists to create and devise pieces for people with dementia. I’ve been part of the chorus in amazing and rarely performed operatic works such as Donizetti’s L'assedio di Calais and I’ve sung the mammoth role of Susanna in Mozart’s The Marriage of Figaro. More recently I’ve had a glimpse into the other areas of opera and indeed of the opera company itself. I directed one of the operas for young people with special educational needs and disabilities (How to find your name) which is currently touring the country and I am also on the board of trustees.

ETO: What was your route into opera? Did you come from a musical family? When did you decide you wanted to be an opera singer?

AK: My dad was part of the Jamaican Folk Singers when he was still living in Jamaica and I think that my mum would have been a fantastic musician if she had been given the chance. As a child, my parents always tried to expose me to as many different past times and recreational activities as possible. I swam, I went to a local dance school, I took piano and violin lessons and I sang in my local church choir. They would take me to see operas, musicals, tennis matches, ballet, pantomimes and plays. Little did they know that I’d eventually get the performance bug and throw out all plans to go into a career in science. I always knew I wanted to sing, I just didn’t know what genre of music I wanted to go into. I went to Birmingham Conservatoire to study vocal studies on a scholarship based on my audition and it wasn’t really until my third year of study when I fell totally in love with opera. I’d always loved the film The Fifth Element and I was smitten by the blue diva who sang the first part of "Il dolce suono", Lucia’s massive aria from Donizetti’s Lucia di Lammermoor. Cut to hearing one of the post graduate diploma students singing it in the opera scenes that year. Hearing and seeing an actual live human being singing it was just tremendous to me and my love affair with opera began in earnest.

ETO: Could you tell us about how you!ve found directing How to Find Your Name?

AK: I have enjoyed every single moment of it. I have always been fascinated by directors. When I’m in a rehearsal room as a performer, I love trying to figure out how the director is holding everything together, so to be able to direct an opera has been a dream. The process of creating How to Find Your Name was so enjoyable. From bouncing ideas around with [writer and ETO Associate Artist] Bradley Travis, [composer] Jo Skillet and [co-designer] Sunny Moon-Little over a few pre pandemic drinks to finally realising that vision has been just wonderful. I had directed devised performances for young people in schools but I had never directed professional singers and musicians before. It's definitely something that I would like to explore further.

ETO: You've been involved in lots of education work with ETO – why do you think music education/early exposure to opera is important?

AK: It’s of absolute importance to the future of opera that early exposure to the art form and to the operatic voice is something that all of us in the industry should ensure happens regularly. After all, the young people that we produce performances for are our future audiences, stage technicians, librarians, directors, musicians and librettists etc. One thing that I’m always pleased about it is how open young people can be to interesting melodies and harmonies. Nothing sounds “weird” or “different” to them unless you tell them it is so which makes it so exciting to compose new music for younger audiences.

ETO: What is your favourite opera?

AK: Eugene Onegin for sure. It was one of the first operas that I had ever performed in the chorus so I have very happy memories of that time. It was also the first time that I’d experienced living and working in London. Obviously the music is terrific. Tatyana’s letter scene really takes me on that journey of first love and fills me with youthful hope every time I hear it even though I know it turns out not so well for her. The main reason I love it though is that Eugene Onegin (the guy who broke Tatyana’s heart), comes crawling back and after professing his love for her and admitting he was totally wrong, (spoilers) she sends him on his way. It’s a very satisfying ending!